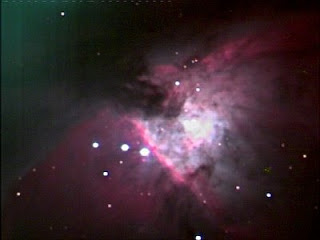 I tested the modified 256 frame-integrating colour Mintron camera at the prime-focus of a 10" F/4.8 Newtonian telescope. The integration was set to 128 frames and DVD was captured. Just 20 integrated frames were summed in Astrovideo to obtain this image.
Lots of colour was captured as well as lots of detail in the trapezium area. Amp glow is visible at the top left of the image as no dark frames were captured as they would have been if the prime aim was to obtain a still image rather than use the camera as an observation camera.


M1, The Crab nebula proved to be a different matter. The real time video image contained hardly any colour. 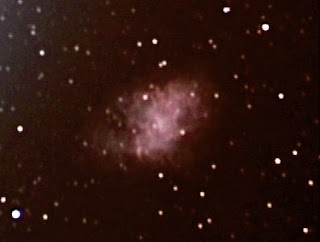 70 integrated Mintron frames were captured and summed by Astrovideo and in the final image, some colour had been detected.


This camera can never be as sensitive as the monochrome version due to the presence of the Bayer matrix colour filters in front of the pixels effectively excluding some of the light.


For comparison, below is a monochrome image of M1 taken with the Mintron MTV-23S85H-EX-R monochrome camera taken on the same night with the same scope. With both cameras the frame integration was set to 256 frames and an 0.5 focal reducer was used in conjunction with an IR/UV cut filtere 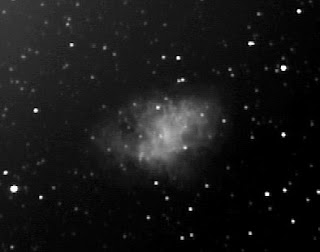