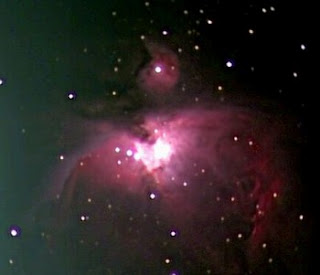 On December 30th 2008 I modified an MTV-62V8H-EX 128 frame-integrating colour camera. I then asked Mintron to make to the MTV-73S85HP-EX-SW-R colour deep-sky Mintron to a similar but improved modification at manufacture time, to produce a 256 frame integrating deep-sky colour camera.

The modified MTV-62V8H-EX colour camera was attached to a Skywatcher Equinox 80mm fluorite apochromatic refractor and focussed on the Orion nebula. The video stream was recorded to DVD at high quality with the camera set to 128 frame integration.

150 integrated frames were registered and stacked by Astrovideo to obtain the image here. 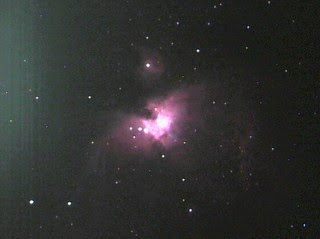 This is a single integrated frame captured from the real time video stream and shows what is seen on the TV screen.
Posted by astroimager at 21:15