Since I have been working in the Telescope Planet showroom http://www.telescopeplanet.co.uk/ I have had the opportunity to test various pieces of astronomical equipment. The 256 frame integrating Mintron video cameras were an exciting opportunity. There is a monochrome version the MTV-23S85H-EX-R and also a colour version: the 73S85HP-EX. This is a fine colour camera for colour, low-light surveillance applications but not so good as a deep sky colour, real-time imager.


I asked Mintron to make a modification to the camera which has made it much more sensitive and suitable as a real-time colour, deep-sky imager. This has been given the designation MTV-73S85HP-EX-SW-R for me. 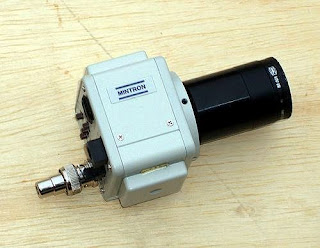 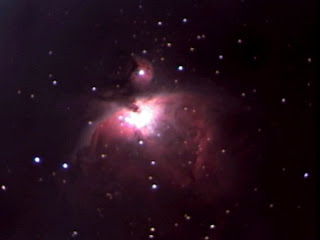 Here is a snapshot of the TV screen showing what the live display is like. The nebula was a very pleasing live image. When 115 frames were integrated as shown above, the resulting image was quite good. 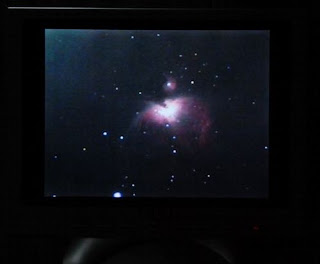 The telescope was mounted quickly on a Merlin AZ autotracking mount and an IR/UV cut filter was used. the Mintron was set to 256-frame integration. 30 minutes of DVD was recorded and Astrovideo was used to capture a frame every 5s for 55s and another image was captured at the same rate of capture for 60s. The frames were summed on the fly and were saved. The images were de-rotated and merged using Picture Window software. It would have been far better to have used an equatorial mount but I had very little time from my location to capture the data as I had been out earlier giving a talk to the Port Talbot Astronomical Society. The Merlin mount can be up and running in 3 minutes.

Since then, the Moon has been a more serious problem and the weather has been poor. The next tests will be done with an equatorial mount so that far more frames can be integrated to produce a final image. I shall use an Apochromatic 80mm refractor next time to image the Orion Nebula and a 10 inch f/4.8 Orion Europa Newtonian to attempt the Crab nebula. This will be done on the first clear sky without the Moon.