A MTV-22S85HC-EX monochrome 1/2" chip Mintron camera was used with a x2 Barlow lens assembly and a H-alpha PST solar scope. Video was captured at shutter speeds to reveal the disk and also to reveal the prominences.
There were numbers of dark filaments as well as some prominences: 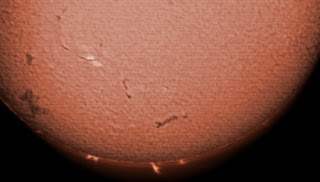 The two levels of exposure were combined and the image was colourised to indicate the colour of H-alpha light
Posted by astroimager at 18:19

An unexpected clear spell between the clouds allowed an attempt at imaging Saturn.
An OMEGA 1/2" chip colour Mintron was used with a Skymax 127 with the lens assembly of a Skywatcher x2 Barlow (approx 1.5x) and a Revelation 2.5 Barlow produced this image from 2000 captured frames: 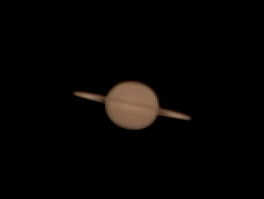 Steve Wainwright
Posted by astroimager at 02:18