The Raspberry Pi camera module as a LunaCam

Lunar imaging with the Raspberry Pi 3 and the Pi Camera module.

The Pi camera module was fitted with a C/CS mount and a scope adapter, and was placed at the Newtonian focus of an f/5, Skywatcher Explorer 130 P-DS OTA Newtonian on a Star Discovery AZ, GOTO mount.

Using Python software that I have been writing for the past couple of weeks. I captured Flat frames against a grey sky and later, 100 bmp images at 800 x 600 resolution. (100 images were also captured at 1024 x 768). The images were registered, flatfield corrected and stacked in lnxstack. The resulting image was processed in the Gimp and Pinta, all native Linux programs, on the Raspberry Pi 3 running Ubuntu MATE.

A Waveshare 5Mp Raspberry Pi camera module with a OV5647 CMOS sensor was used because the lens assembly can be unscrewed and replaced by a C/CS mount, or the lens itself can be unscrewed and a standard webcam scope adapter attached. A 1m ribbon cable enabled the camera to be mounted on the scope. 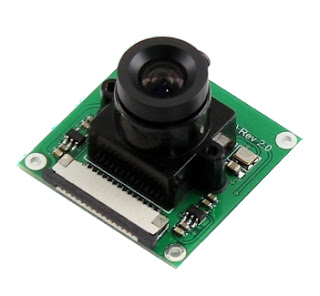 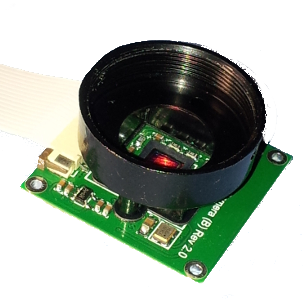 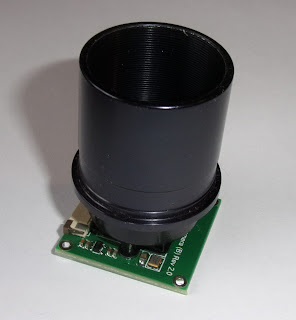 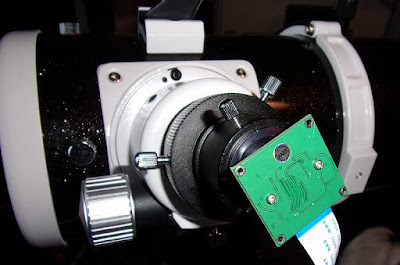 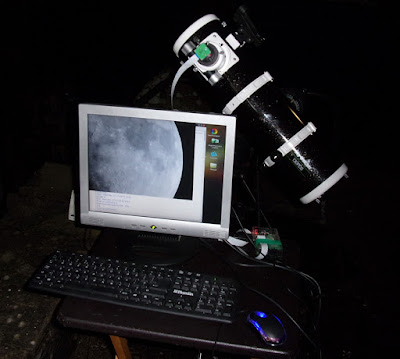 Semi-transparent mode for setting up captures 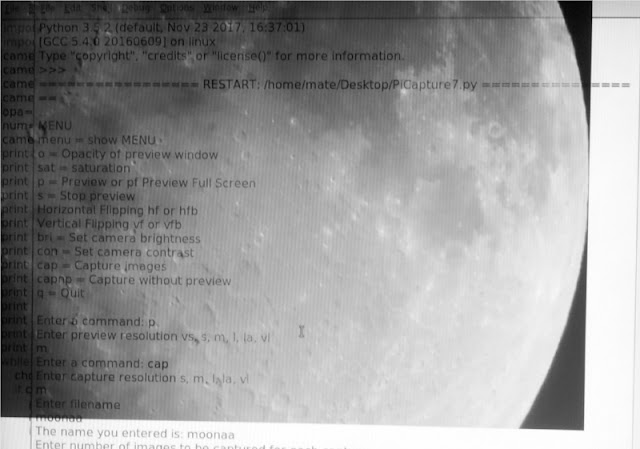 Fully opaque mode for setting camera brightness & contrast
Click on the image to get a closer view. 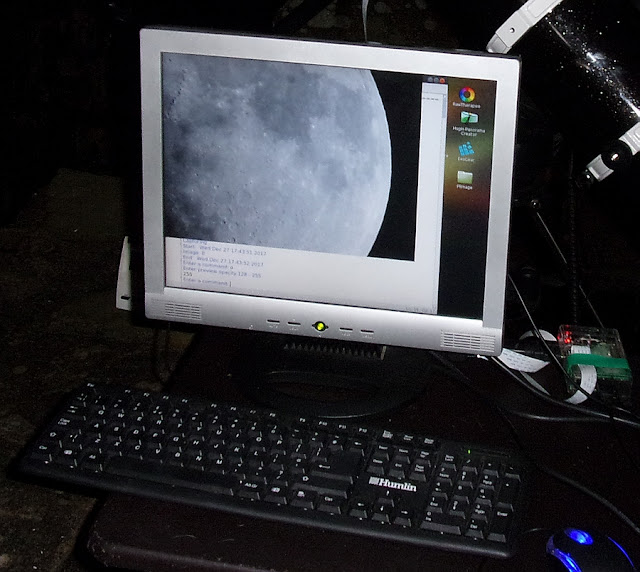 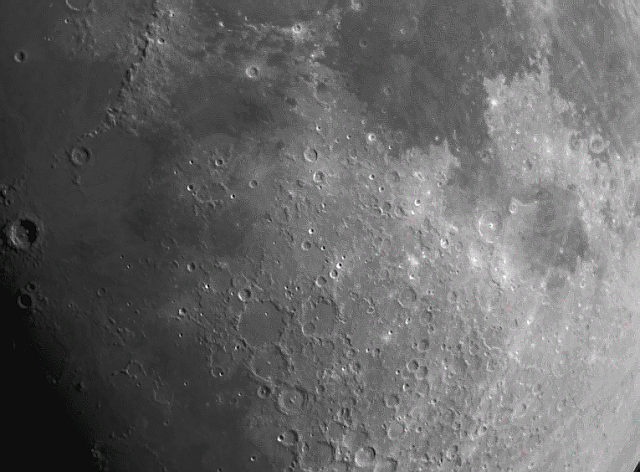 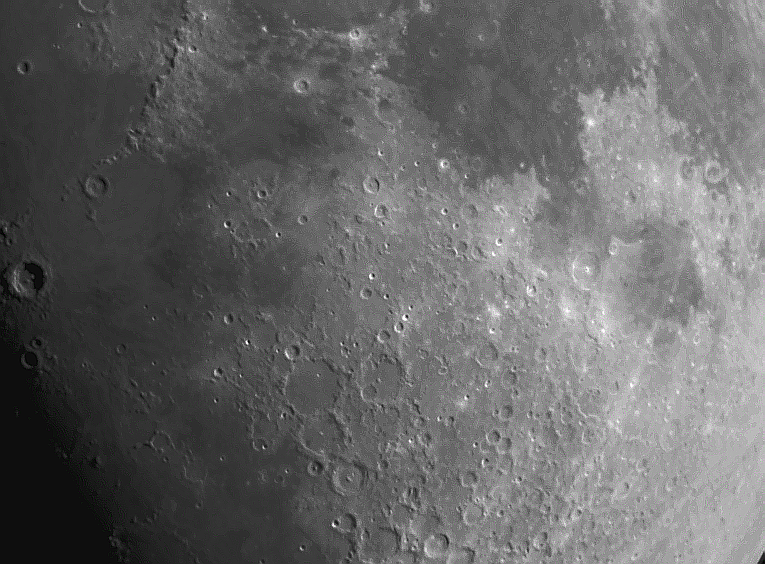 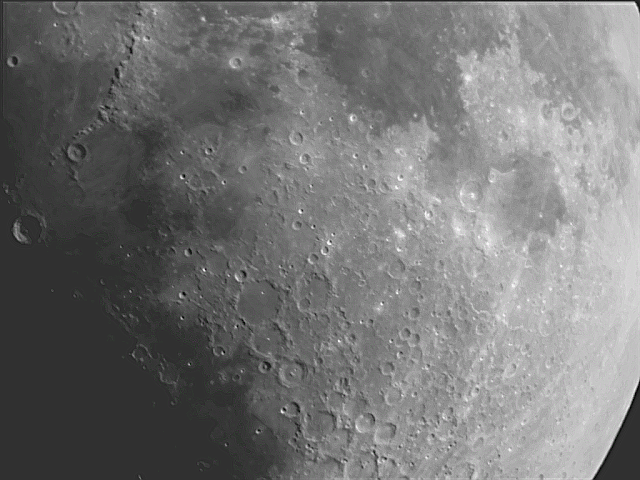 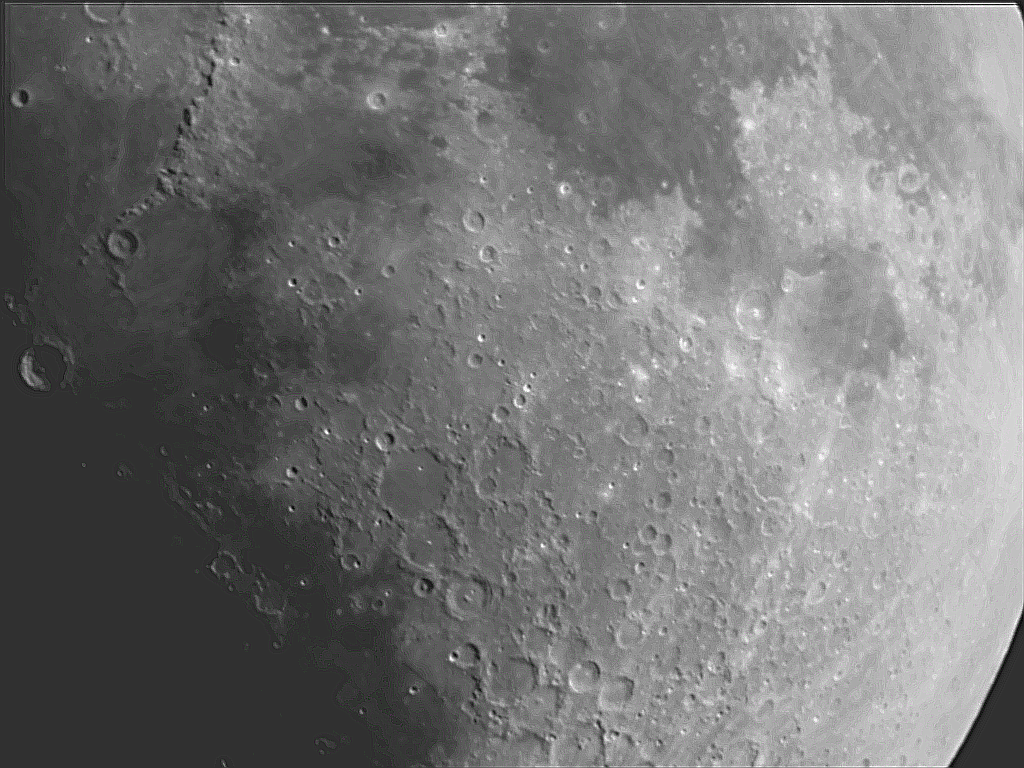 The Pi camera module will be implemented in AstroDMx Capture for Linux. However, Nicola is currently sorting out an issue with the ZWO SDK with USB2 and long exposures before a new version is released implementing the QHY cameras. QHY is already implemented, but the release is delayed until the issue with the new ZWO SDK is resolved.
Meanwhile, my simple Python program is showing that the Picam module has potential as a prime focus Lunacam.

Four overlapping panes of the Moon were captured as 2500 frame SER files at maximum resolution of 1280 x 960, using AstroDMx Capture for Linux, running in Debian, with an f/5, Skywatcher Explorer 130 P-DS OTA Newtonian and a QHY-5L-II-M camera, fitted with a 2" adapter and a 13% transmission neutral density filter, mounted on a Celestron AVX, EQ, GOTO mount. The best 40% of the frames in each SER file were stacked in Autostakkert! running in Wine. Each of the four resulting images was wavelet processed in Registax 5.1 running in Wine and the resulting images were stitched in Microsoft ICE also running in Wine. The final Mosaic image was processed in the Gimp 2.9. 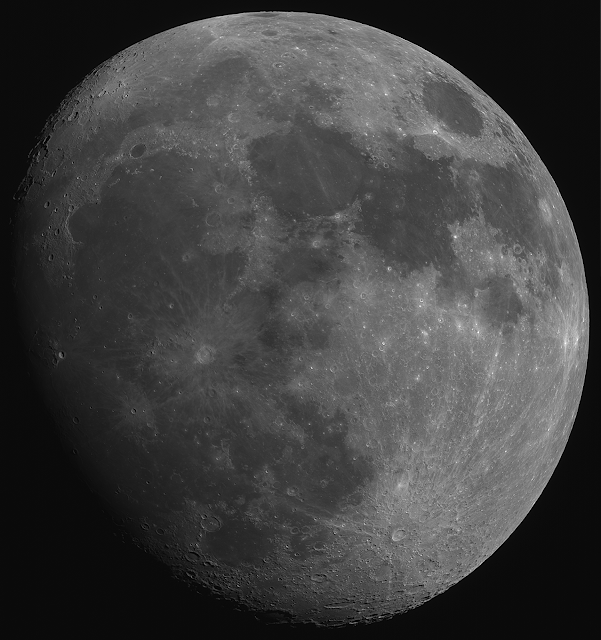