Although this experiment was done with AstroDMx Capture for Windows, it all works the same way with other operating systems.

This was not an imaging session, it was an experiment into the ability of AstroDMx Capture, using an INDI server running in a Raspberry Pi SBC to send the scope (mount) to a variety of objects and then to centre them on the camera sensor. 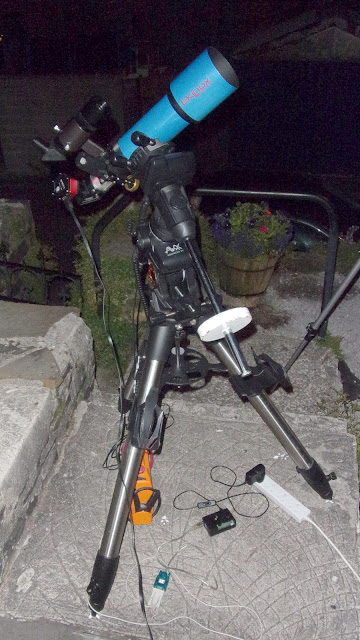 The Raspberry Pi was placed on the floor between the feet of the tripod, attached to the hand controller, and communicating with the network wirelessly. 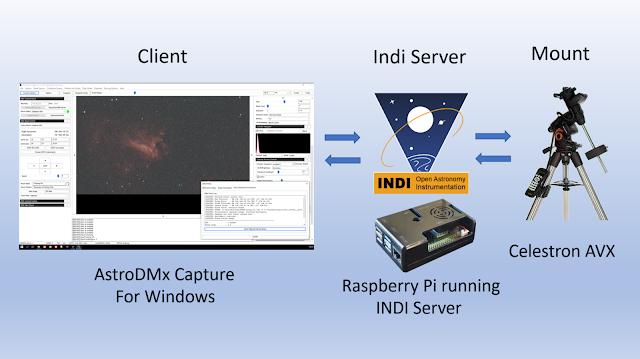 The INDI server uses the INDI library. The INDI Library is open source software for controlling astronomical devices such as mounts. It is based on the Instrument Neutral Distributed Interface (INDI) protocol and acts as a bridge between software clients and hardware devices. It enables a client to communicate with equipment directly over a network. 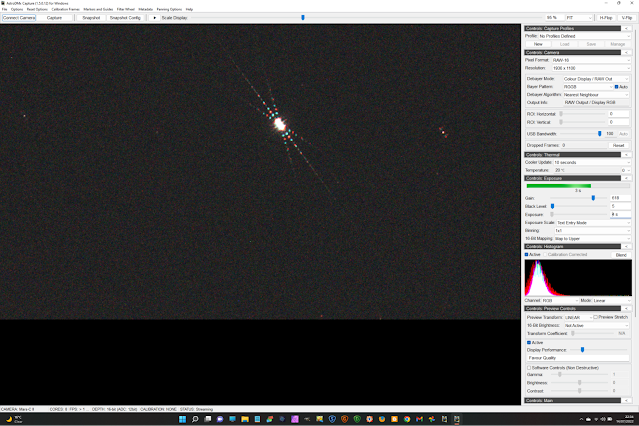 The GOTO sent the scope (mount) to M17, but the Omega Nebula has not been placed in the centre of the sensor’s field of view. The accuracy of the GOTO will depend on the accuracy of the polar alignment and the number, and accuracy of the alignment stars. With a small sensor such as that in the Player-One Mars-C II (IMX662) OSC camera, it is even likely that the object could miss the required object entirely. 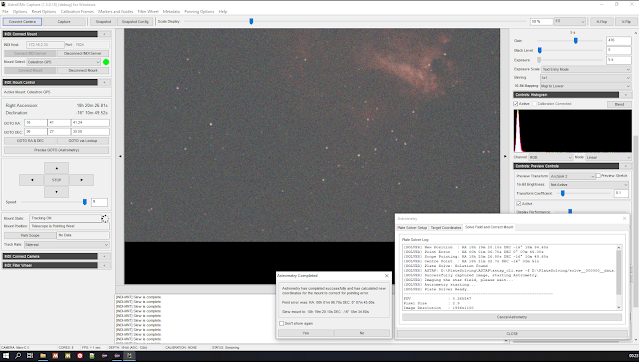 However, AstroDMx Capture can plate solve an image of the current field of view and calculate the corrections required for the mount to centre the object on the sensor. 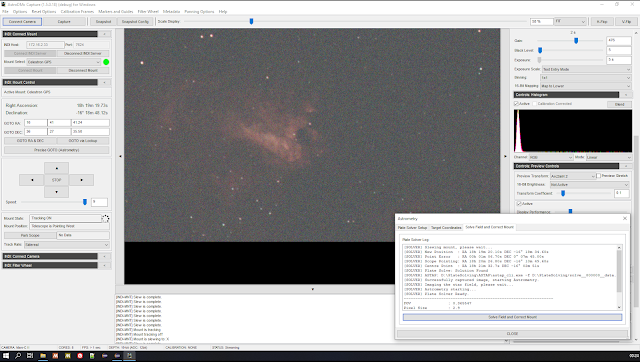 AstroDMx Capture can then be set up to go to another object and is set up here to move on the M20, the Trifid Nebula. 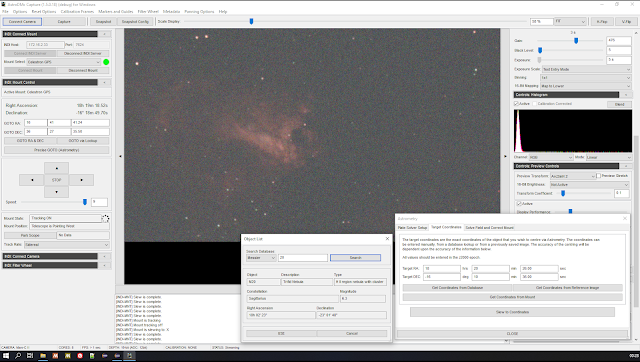 The mount has slewed to the Trifid nebula but the object is not in the centre of the field of view. 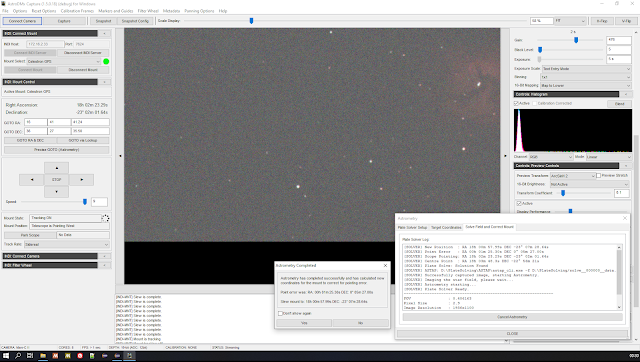 The star field has been solved, the corrections to the mount have been calculated and M20 has been placed in the centre of the field of view. 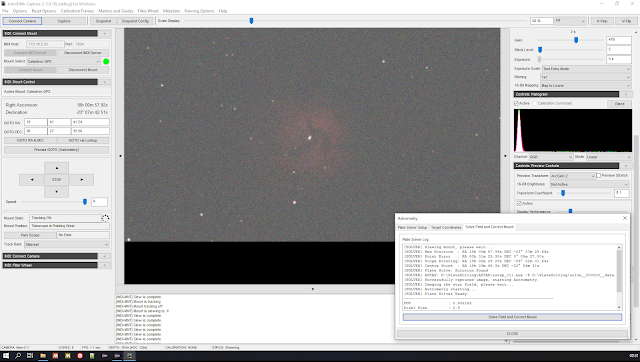 The mount is now being set up to slew to another object, M16 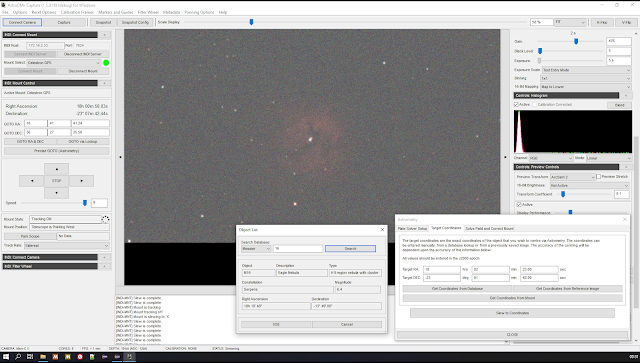 In this case, the scope(mount) has been sent to M57, but the object hasn’t fallen on the sensor at all, it is somewhere just outside the field of view. 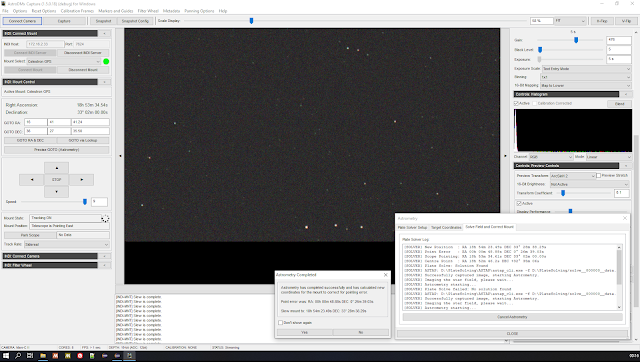 The star field has been solved, corrections to the mount made, and M57 has been placed in the centre of the field of view. 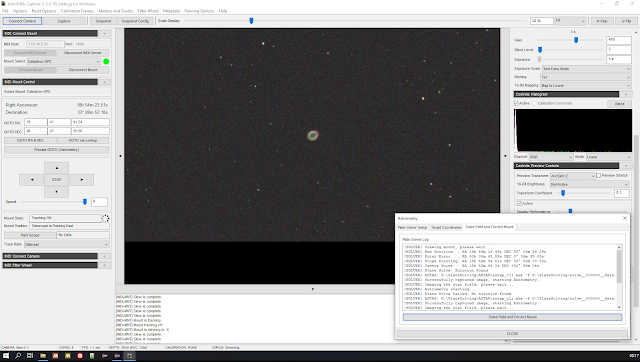 As previously stated, this was not an imaging session, it was an experiment to test the ability of AstroDMx Capture and a Raspberry Pi running an INDI server to control an equatorial mount and to centre objects of interest in the camera's field of view. A camera with a relatively small field of view was used in order to make the plate solving more challenging.

The system worked perfectly and brings the new functionality of AstroDMx Capture that much closer to release. The GUI will continue to be refined as the software approaches release.