The Star Discovery AZ, GOTO mount with a Star Discovery 150 mm, f/5 Newtonian was use with the LN300 video camera fitted with a Baader UV/IR rejection filter to image M17.
In this experiment the SENS was turned off so that the camera was not accumulating frames. The AGC was set to low and the LENS control which controls shutter exposure, was set to x 256 of the normal shutter exposure of 1/50s per half frame. This gives an exposure of 5.12s. It should be noted that the shutter speed function changes by factors of 2 in the same way to that of the SENS frame accumulation. This camera can go to 20s with a factor of x 1024.
The camera was connected to a Windows 10 computer via a Digital Climax VCap303 capture card.
SharpCap was used to capture frames from the camera at a rate of one frame per 5 seconds and the frames were saved as PNG files. 100 x 5s frames were captured along with 50 x dark-frames.
The frames were dark-frame corrected, de-rotated and stacked in Deep Sky Stacker, stacking the best 80% of the frames.
The resulting image was post processed in Photoshop: 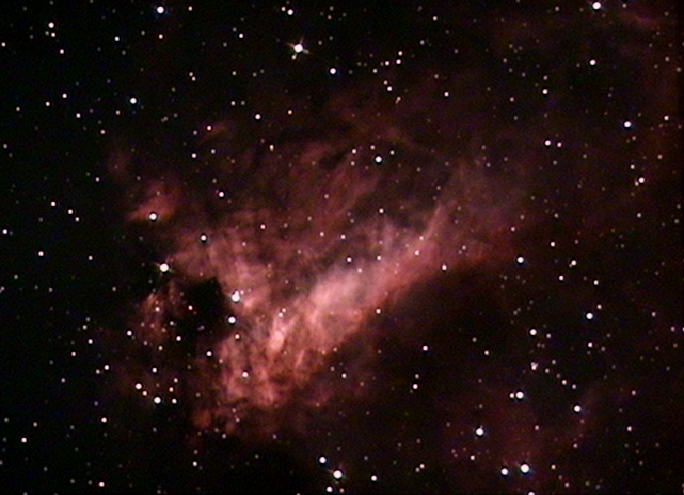 In the absence of any user documentation, the functions of the camera are having to be deduced by experiment.
Using the settings above, the camera produced a very pleasing live display which will be very useful for star parties when a small video monitor will be used to display the image rather than a computer.