I had some help with our first experiments on RGB imaging with an MTV-22S85HC-EX monochrome 1/2" chip Mintron. Wayne Jones of the Swansea Astronomical Society used his 130mm F:900mm Newtonian on a driven equatorial mount. He used Red Green and Blue simple colour filters that are not designated for RGB imaging but which have good characteristics of filtering out the other colours.

The technique he used was to place the Mintron back in the focuser in exactly the same orientation after each filter change. This was essential because there was not enough in focus on the scope to use a filter wheel. He has devised an ingenious way of doing this.
AVIs were captured at different levels of frame accumulation for each filter. The unique frames were extracted from the AVIs using VOB Frame extractor which will work on AVI containers as well as DVD VOB files. The frames were stacked in Registax and the different 'exposures' registered and combined in Flexible Image Combine, which computes a weighted average of the frames used. The resulting monochrome images taken through Red Green and Blue filters were registered and combined into an RGB image in CAP (Colour Alignment Processor). The final image was adjusted for levels, colour balance and saturation in The Gimp image processor.

This is the result obtained by Wayne on March 4th; an RGB image of M42: 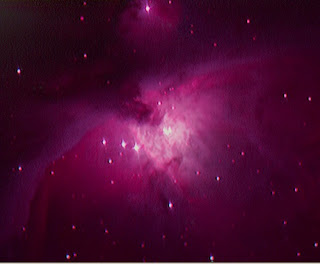 I used a Skymax 127 on an equatorial mount with a Kson manual filter wheel. 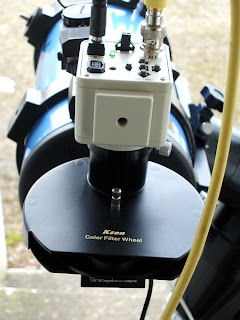 The Red and Green filters were Opticstar Imaging filters and the blue filter was a Kson filter, somewhat darker than the Opticstar one. With hindsite, maybe this was a mistake. 15 minutes of DVD were recorded with each filter and 10 minutes without a filter. However, for all of the video, a Skywatcher light pollution filter was on the nosepiece of the MTV-22S85HC-EX 1/2" chip monochrome Mintron.
The unique frames were extracted from the DVD VOB files and were stacked in Registax.
The resulting monochrome images were registered and combined as RGB colour layers in the CAP software. The final image was adjusted for levels, colour balance and saturation in The Gimp image processing software.

RGB image of the trapezium area of M42 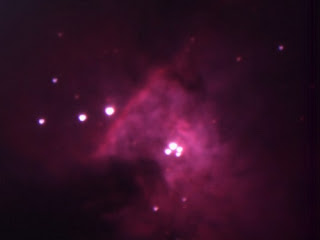 This was the Luminance image 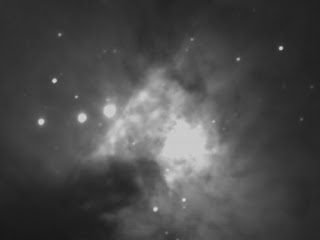 LRGB image of the trapezium area of M42 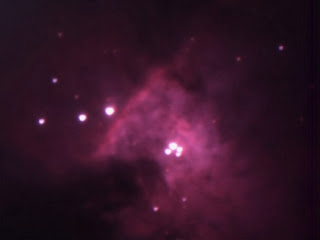 Dont forget to click on 'Older Posts' or 'Newer posts' below, browse the 'blog archive' on the left, or click on 2009 or 2010 to see all of the posts for that year on one page.