Capturing an AVI of M101 with GStar
GStar is a freeware AVI capture program written by Steve Massey.

The virtue of this program when capturing AVIs from a frame-integrating camera is that it can be set to capture a frame after a set number of seconds and to concatonate the frames thus captured into an AVI file. As with HandyAVI, this allows the integrated frames to be captured without duplication. Both of these programs work with Windows Vista.
I had captured Video of M101 to DVD with a MTV-23S85HC-EX-R monochrome deep-sky Mintron, at High Quality as in the previous post.
Here I used GStar to capture 200 frames from the DVD recording and store them as an AVI.
GStar capture screen 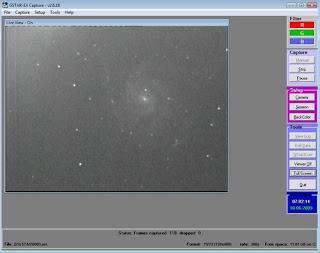 The characteristic Amp Glow can be seen to the left and top of the image.
I also had captured Dark-frame video to DVD and I used GStar to capture 50 integrated dark-frames to AVI. I stacked the 50 frames in Registax 5 and the result is a dark -frame in which the amp glow is clearly seen as well as vertical banding.
Dark-Frame produced by Registax 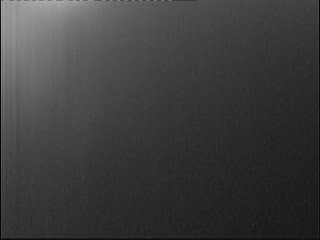 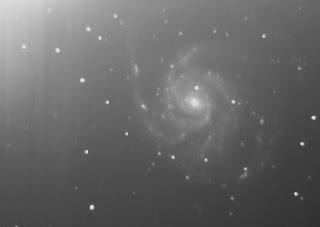 However, if the dark-frame generated by stacking the dark-frame data is used as the dark-frame in Registax, the correction can be seen to be over compensated and where the amp-glow showed, now that part of the image is too dark. This is because the 256 frame integrating Mintron camera still auto compensates when the scope is covered to produce dark-frame data even if the AGC is set to OFF.
Stacked image using the raw dark-frame 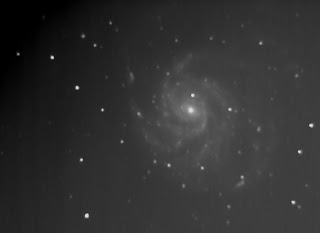 The solution is to scale the dark-frame so that it compensates exactly the correct amount.
This can be done easily if the capturing and registering is being done on the fly in AstroVideo. However, a different approach is needed if other software is used for capture. The scaling must be done by trial and error although it doesn't take long to get the correct degree of scaling.
The dark-frame must be scaled down before it is used in Registax. If it is scaled by the right amount, the resulting image will be properly corrected.
Image resulting from using a dark-frame scaled to 0.56 of its original value. 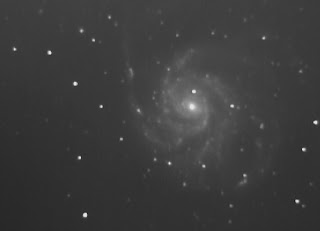 In this example, the dark-frame is added to itself and then divided by 3. The resulting image is 0.666 of the brightness of the original dark-frame.
The table below shows a simple scheme starting with a dark-frame for generating variously scaled darkframes. This table can easily be extended to produce various levels of scaling:
Table for generating scaled dark-frames using Image Arithmetic

Dont forget to click on 'Older Posts' or 'Newer posts' below or browse the 'blog archive' on the left, or click on 2009 to see all of the posts for this year on one page.