A Mintron MTV-23S85HC-EX-R monochrome deep-sky frame-integrating camera was used with an Opticstar 0.5 focal reducer and a light-pollution filter at the Newtonian focus of a 10 inch Orion Newtonian reflector. The real-time video was recorded in high quality to DVD. Later the DVD was played back through a capture card and AstroVideo was used with an XP computer to capture 180 frames with a frame captured every 5 seconds with scaled, dark-frame subtraction, registering and summing on the fly. The darkframe was the sum with fixed alignment of 20 frames captured from DVD recorded with the scope covered. The frame was scaled to 0.03 of the summed image rather than the 0.05 as would be expected if the camera did not auto adjust when covered.
M101 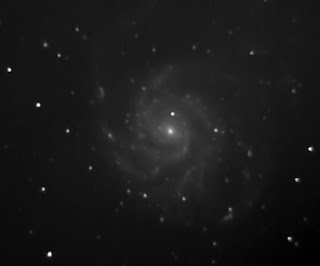 I shall experiment with HandyAvi on a Vista computer to capture frames, and dark-frame scaling in other applications before the frames are stacked in Registax.

Dont forget to click on 'Older Posts' or 'Newer posts' below or browse the 'blog archive' on the left, or click on 2009 to see all of the posts for this year on one page.
Posted by astroimager at 12:47