Using a Mintron with a scope on an Altazimuth mount

De-rotating a set of Mintron images
A problem with using altazimuth mounts for imaging is that long exposures result in image rotation.

This demonstration was done with a DVD recording of M42 using an 80mm f/5 achromat refractor and an MTV-73S85HP-EX-SW-R colour deep-sky Mintron mounted on a Merlin altazimuth driven mount. Images were captured and combined so that in the resulting stacked image there was no rotation within the image. This was done by experiment and then 4 such stacked images were captured in succession. Although there was no rotation within each stacked image, the images were not derived from many integrated frames. When the 4 images were themselves stacked in Registax, the resulting image showed considerable image rotation. 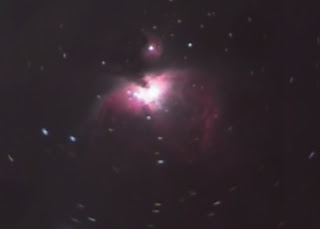 The stars have trailed out into little arcs.

However, the freeware software Deep Sky Stacker will de-rotate the images with respect to each other before they are stacked. This was done with the same 4 images and the resulting stacked image showed no rotation, the detail was not motion blurred and the image had a higher signal to noise ratio.

Deep Sky Stacker does not have the sophisticated wavelet processing posessed by Registax but the de-rotation of images with respect to each other before they are stacked gives more power to an altazimuth mount as an imaging tool in combination with a Mintron or other camera.

Dont forget to click on 'Older Posts' or 'Newer posts' below or browse the 'blog archive' on the left, or click on 2009 to see all of the posts for this year on one page.