Can a fully automatic cheap, modern webcam be suitable for an introduction to lunar imaging?

Firstly, to make it clear, this article is not an endorsement or a recommendation for a particular webcam. It is simply reporting the results of an experiment.

The webcam that was used cost less than £14 on Amazon. It is fully automatic in that it offers no functional controls to imaging software. AstroDMx Capture for Windows was used to capture data from the camera. AstroDMx Capture does have software controls that can be applied to save data if required, and this can be helpful if a camera doesn't present any controls.

The webcam used for this experiment. 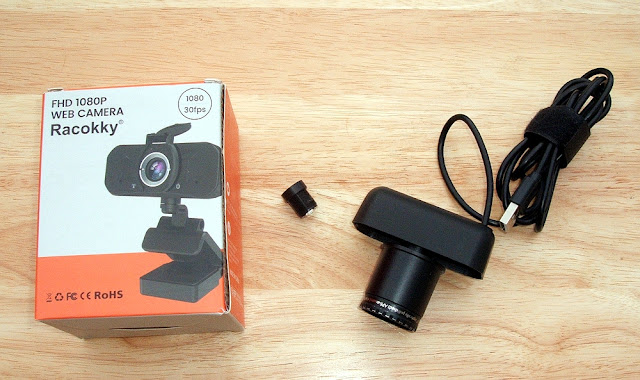 The webcam was originally purchased to monitor an aquarium in which fish were breeding. It had to be high resolution, and this one is a true Full HD camera. It also had to be able to be focused rather than have an automatic focus.

The camera was easy to disassemble. The front of the camera just pops off, being held in place by small, integral plastic clips. The lens is a Standard S-mount M12 lens of the type often used with board cameras. It had been pre-focused at the factory and then a dab of glue had been used to cement the focus. With a pair of plyers, the glue could be broken and the lens either removed, or focused to a different distance as was required for monitoring the equipment.

Superfluous parts of the camera were removed and discarded and for aquarium monitoring, the camera was held in position with a clamp stand. For the astronomical imaging experiment the lens was removed and replaced by a standard 12mm x 0.5mm Mogg adaptor. 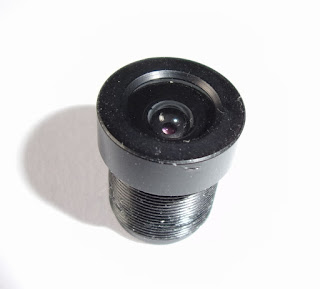 The lens replaced by a Mogg adaptor 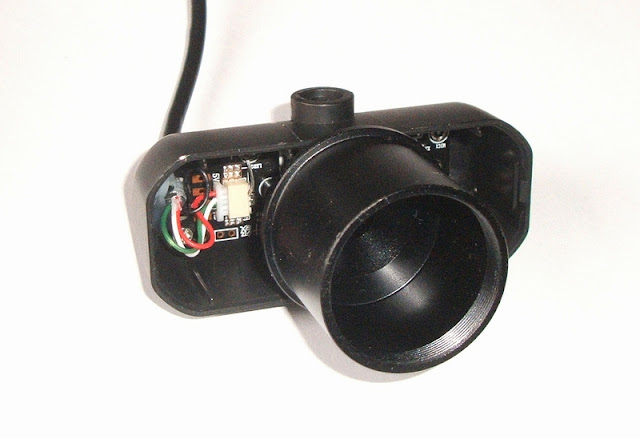 The lens has a UV/IR cut filter attached to the bottom of it, so the filter is removed along with the lens 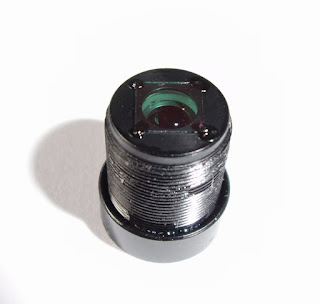 It is therefore necessary to fit a UV/IR cut filter to the front of the Mogg adaptor. This corrects the colour balance, which would otherwise have a pink shade, but also eliminates the UV and IR wavelengths that may not come exactly to the same focus as the visible light in a telescope that uses lenses. 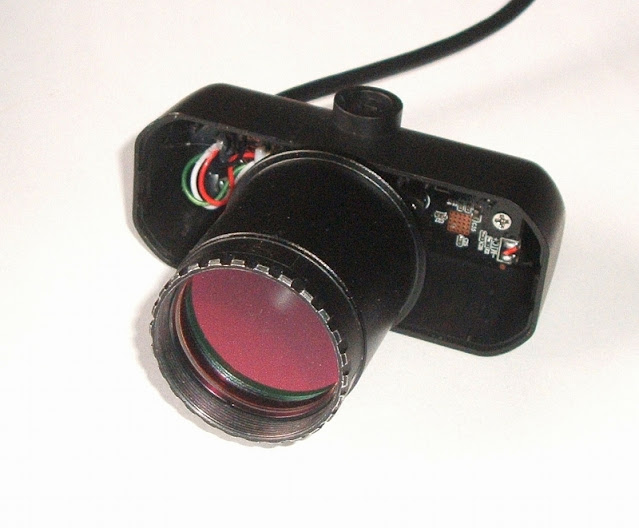 The front of the camera housing could easily have been clipped back in place, but it was left off to provide ventilation and heat dissipation from the electronic components. In addition, two superfluous LEDs were cut away from the circuit board. They serve no function for the camera and produce unwanted light. It is standard practice to remove any microphone from webcams as sound is not required.
It was discovered that the camera shows no pixel vignetting a phenomenon that is a blight to many modern webcams when they are adapted for astronomical imaging. Cameras which have proper lenses and M12 threads such as the camera tested here are the least likely to show pixel vignetting. On the other hand, cameras with very small sensors, lens threads smaller than M12 and tiny lenses, that are often little more than pinholes, often show pixel vignetting. The lack of pixel vignetting is a bonus for this camera.
Legacy webcams and some modern webcams have controls that are available to imaging software, and are desirable for optimising the properties of the video stream such as brightness, contrast and maybe even exposure. This camera offers no functional controls to imaging software. The camera is intended to be a high resolution video conferencing webcam that will automatically adapt to different lighting conditions in order to maintain an optimal image. Moreover, in order to maintain a satisfactory frame-rate at high resolutions, compression of the video stream is automatic.
It was the purpose of this experiment to determine whether the automatic features of the camera would be able satisfactorily to cope with the lighting on the Moon as 'seen' by the camera through the telescope; and secondly, to determine whether the compression of the video stream would result in compression artefacts that would ruin the final stacked image. If the camera performed well enough in both of these aspects, then it might be possible to conclude that such a camera might be suitable for outreach work and possibly as an introduction camera to lunar imaging.
The webcam was placed at the Cassegrain focus of a Skymax 127 Maksutov that was mounted on a Celestron AVX mount. AstroDMx Capture for windows was used to stream video of the 30.5% waxing Moon, and to capture 1000-frame SER files at maximum resolution of 1920 x 1080. The software was set to map to greyscale which would produce a greyscale file of only 1/3 the filesize of a colour image. The camera was oriented to capture the maximum amount of the Moon and the terminator was the area of interest.
Click on an image to get a closer view
Screenshot of AstroDMx Capture for Windows capturing a SER file of part of the lunar terminator 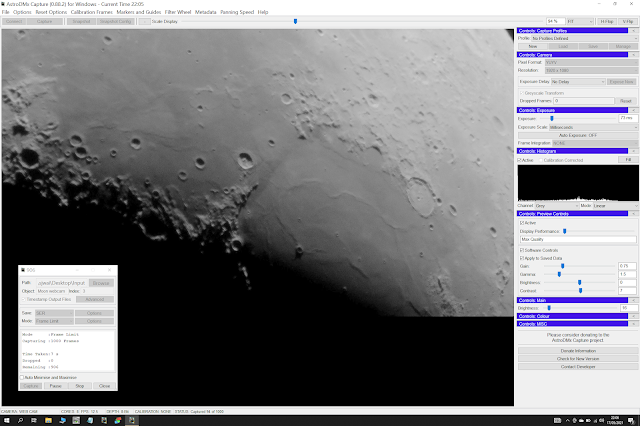 The best 50% of frames in the SER file were stacked and wavelet processed in Registax 6 (which is able to stack monochrome SER files, Autostakkert! can stack colour SER files). The resulting image was reoriented to the correct orientation.
The post-processed image 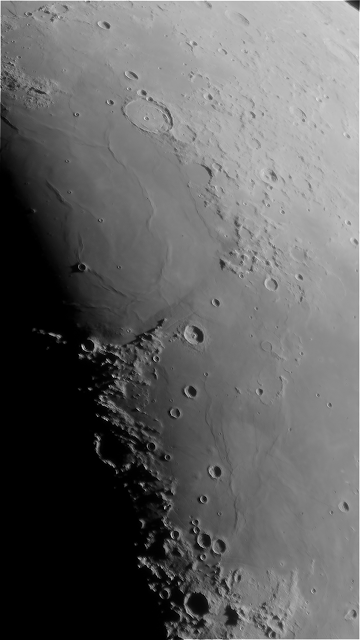 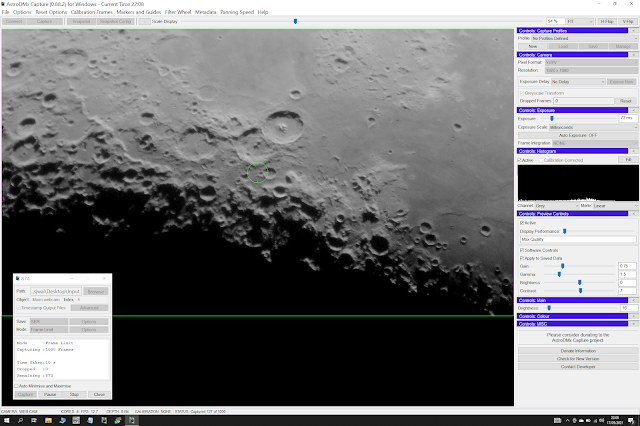 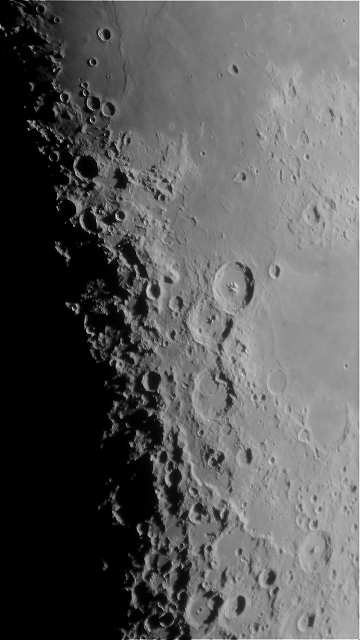 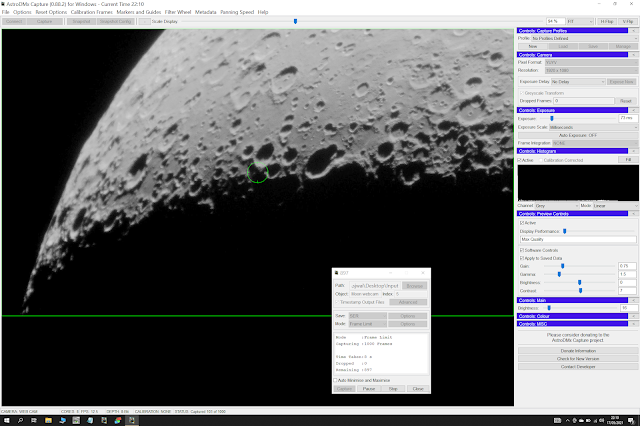 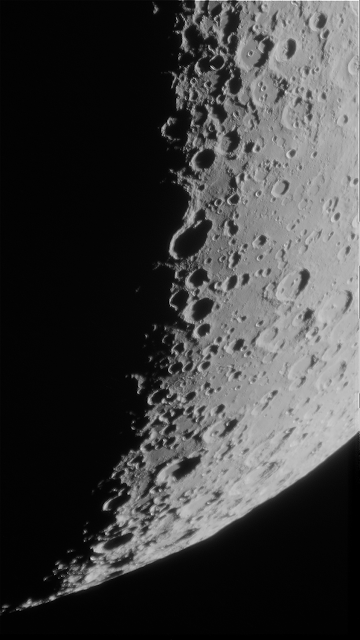 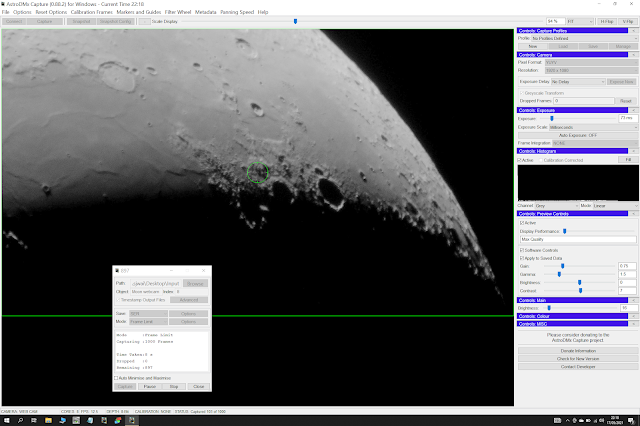 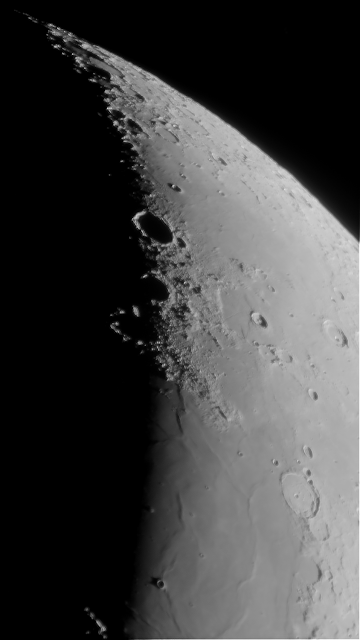 The conclusion is that the automatic functions of the webcam coped quite well with the lighting conditions on the Moon and it may be that a cheap, fully automatic camera such as this one could be suitable for outreach and/or as an introduction to lunar imaging.