SVBONY have not produced an SDK for the SV305 camera at this date. However, using virtualisation, I have been able to use the camera on a MacBook running High Sierra. A previous blog shows AstroDMx Capture for Linux running in an Oracle VM VirtualBox running Lubuntu Linux on a Windows computer. The process of installing the VirtualBox and its Lubuntu Guest operating system is the same as described for Windows. However Right CTRL + C are replaced by Left command + C in the instructions for macOS. Also, enable USB 3.0 in the VM VirtualBox manager, particularly if other cameras are to be used. Moreover it seems that macOS already has virtualisation enabled.

The SV305 camera is fully implemented in AstroDMx Capture for Linux and will run perfectly well in an Oracle VM VirtualBox running Lubuntu Linux.

Screenshot of AstroDMx Capture for Linux streaming data on a painting of comet Hale Bopp by Nick Hart that hangs on our wall. 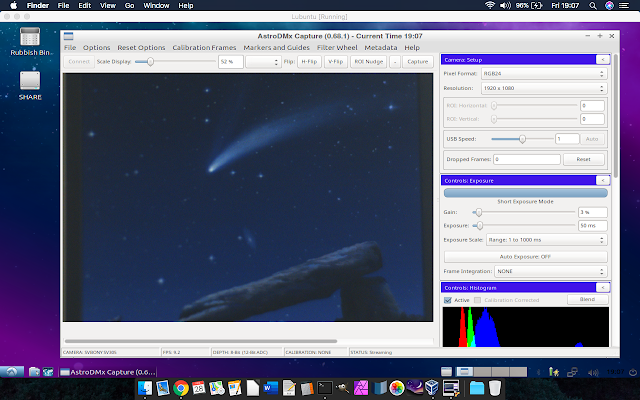 The installation of VirtualBox and Lubuntu Linux as the Guest operating system is quite straightforward and, until such time as there is a macOS SDK, the virtualisation allows the used of the SV305 on macOS.
Data captured are saved in a shared folder as described in the blog about using VirtualBox in Windows and are available directly for processing in macOS programs or programs running in Wine.
Posted by astroimager at 19:29