Release of Version 0.68.1 of AstroDMx Capture for Linux

Nicola has released version 0.68.1 of AstroDMx Capture for Linux 64 bit. 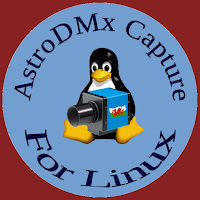 Added Adaptive Homogeneity-Directed (AHD) Debayering Algorithm. AHD is a very high quality debayering algorithm which is computationally heavy and so it should only be used for long exposures.

Exposure values can now be typed for improved selection precision. Exposure values are entered by typing a number followed by ms for milliseconds, s for seconds and m for minutes. The following shows a few examples:

The Exposure slider can, of course, still be used as normal, but the ability to type in exposure values make it easier to exactly and quickly reproduce exposures.

SVBony SV305 one touch white balance function has been added.

An 8-bit monochrome output format for the SVBONY SV305 has been added.

The installers for AstroDMx Capture now create a new menu category called "AstroImaging" and the software launchers are placed into this category. Depending upon your specific distribution, the software categories might not be visible.

The 32 bit Raspberry Pi version will follow shortly.
Posted by astroimager at 22:23