This is a low priced astronomy camera that is a suitable introduction to astronomical imaging; not only of the Solar system but also some of the deep sky objects.
The camera is marketed as a high-speed camera and, by implication, a planetary camera.
It can be obtained from the SVBONY official AliExpress store.
I have tested the camera specifically as a Linux astronomical camera using AstroDMx Capture for Linux. The camera supplied by SVBONY was packaged well and includes a number of items.

The camera with the par-focal ring in place 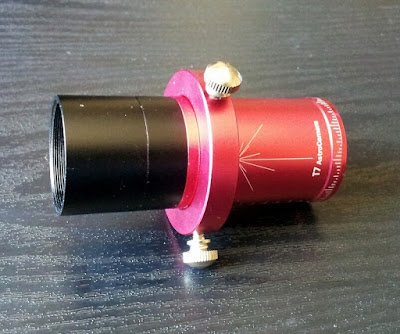 The par-focal ring is of a superior design with the three thumb screws engaging on an internal O-ring so the screws don’t actually make contact with the camera (or eyepiece) body.

One of the first things to do with a camera of this design is to place a patch of insulating tape over the auto-guiding port. This will ensure that the camera USB cable is not accidentally plugged into the guiding port in the dark. Some manufacturers provide a blanking plug for this purpose but many do not. 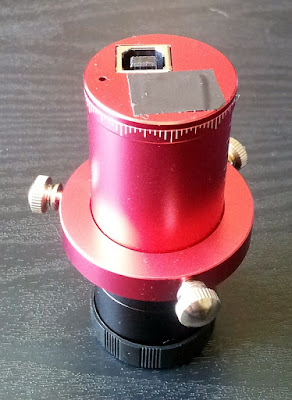 The substantial par-focal ring can be seen clearly with its three retaining screws.

There are very handy calibration marks on the side of the camera body, making re-positioning much easier.


Calibration marks on the camera body 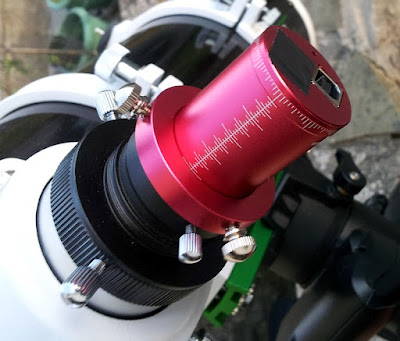 The camera reports itself as a ZWOASI120MC although it contains a MT9M034 sensor rather than the AR0130CS of the ZWO. The camera will stream 8 bit images and it will stream 16 bit (12 bit in a 16 bit container) images for short exposures. The camera will not reliably deliver 16 bit long exposures. This is not a serious limitation for a camera of low cost. (Moreover, a similar issue is evident in the USB 2.0 ZWO with 16 bit long exposures if the compatibility firmware is used.) In this experiment, the standard camera firmware was used, and a Linux machine with the kernel patched to eliminate the maxpacket limitation in the USB data stream was employed. Note! with the Linux Kernel 4.16.8-300.fc28.x86_64 released by a Fedora 28 update on May 15, 2018, no kernel patch is needed. 16 bit short exposures could be advantageous with solar imaging where the capture of subtly different levels of brightness is important. With 8 bit images, 256 distinct levels of brightness can be recorded, whereas, with 12 bit output (into a 16 bit container) 4096 distinct levels of brightness can be recorded.

The SVBONY T7 astrocamera was placed at the Newtonian focus of an f/5, Skywatcher Explorer 130 P-DS Newtonian mounted on a Celestron AVX, EQ, GOTO mount. 30 x 20s exposures of M3 were made with real-time dark-frame correction, saving the images as TIFF files using RAW 8 capture with high quality de-bayering on the fly. 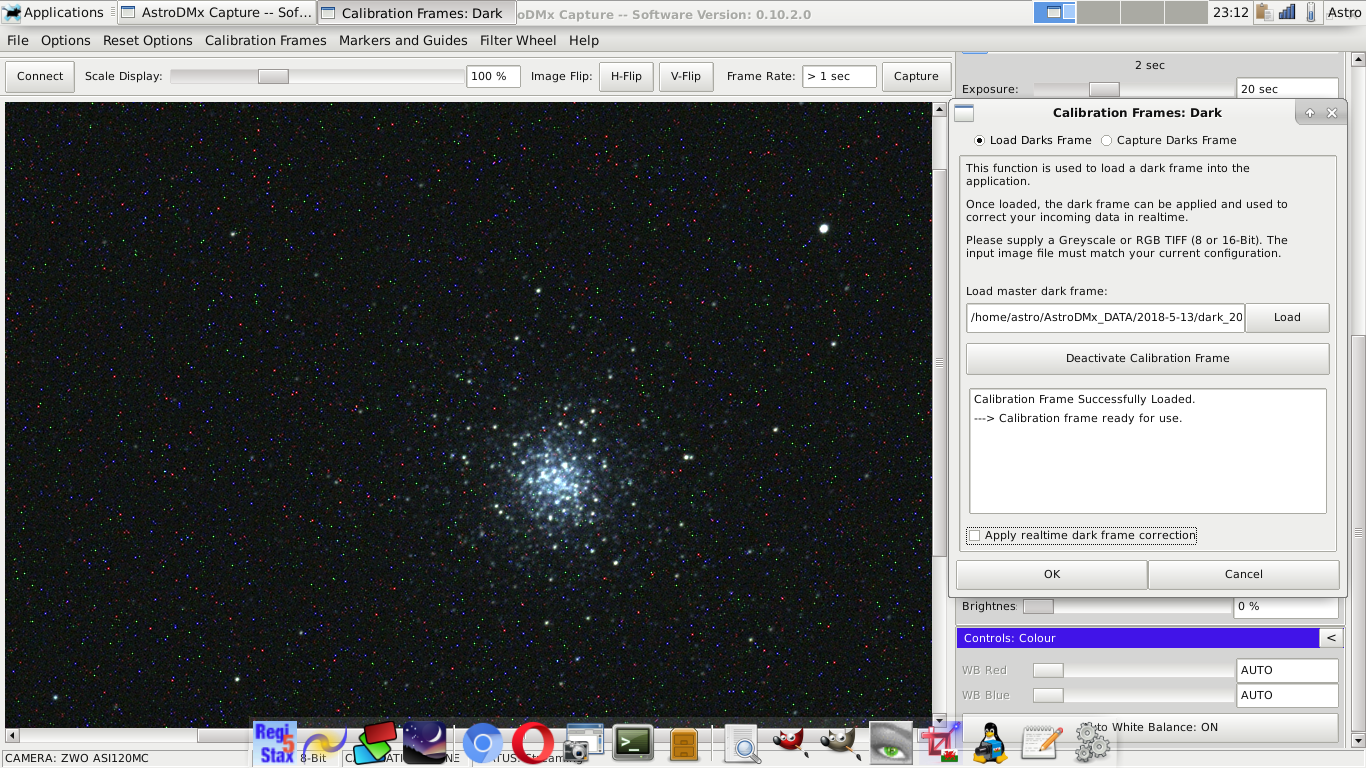 Note the background noise in the displayed image. 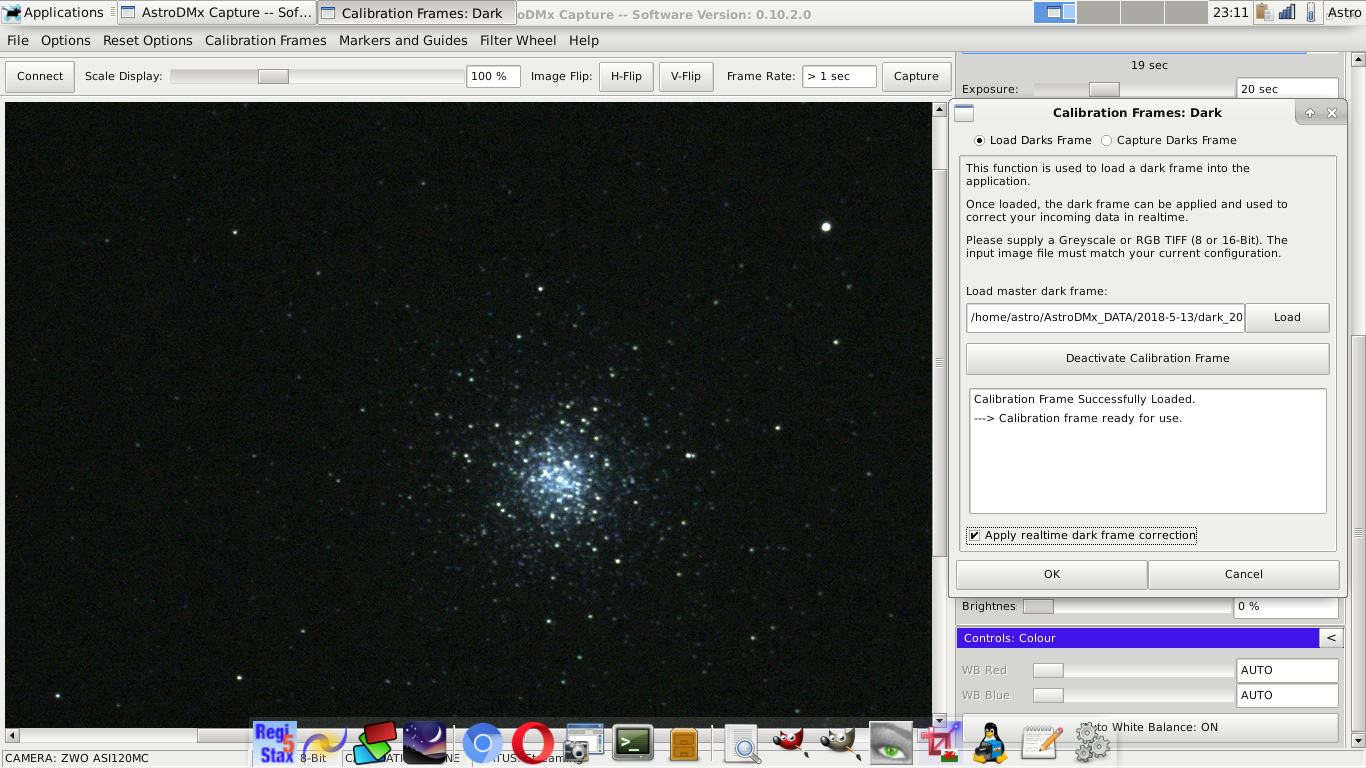 Note the removal of the background noise by the real-time dark-frame correction.

The real-time dark-frame correction is ideal for outreach and ‘eyepiece sharing’ observing and imaging.
The images were stacked in Deep Sky Stacker running in Wine and post processed in The Gimp 2.10 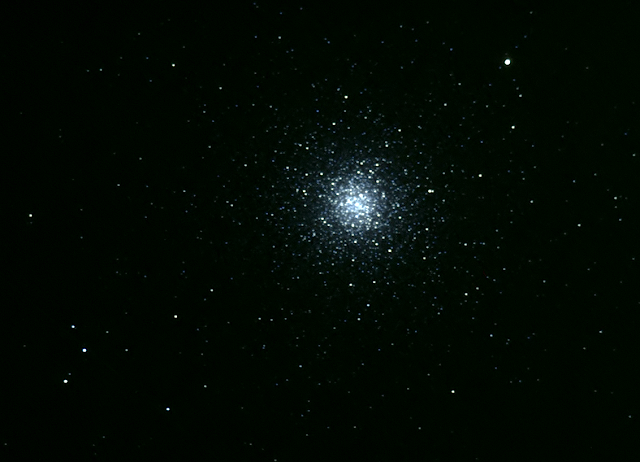 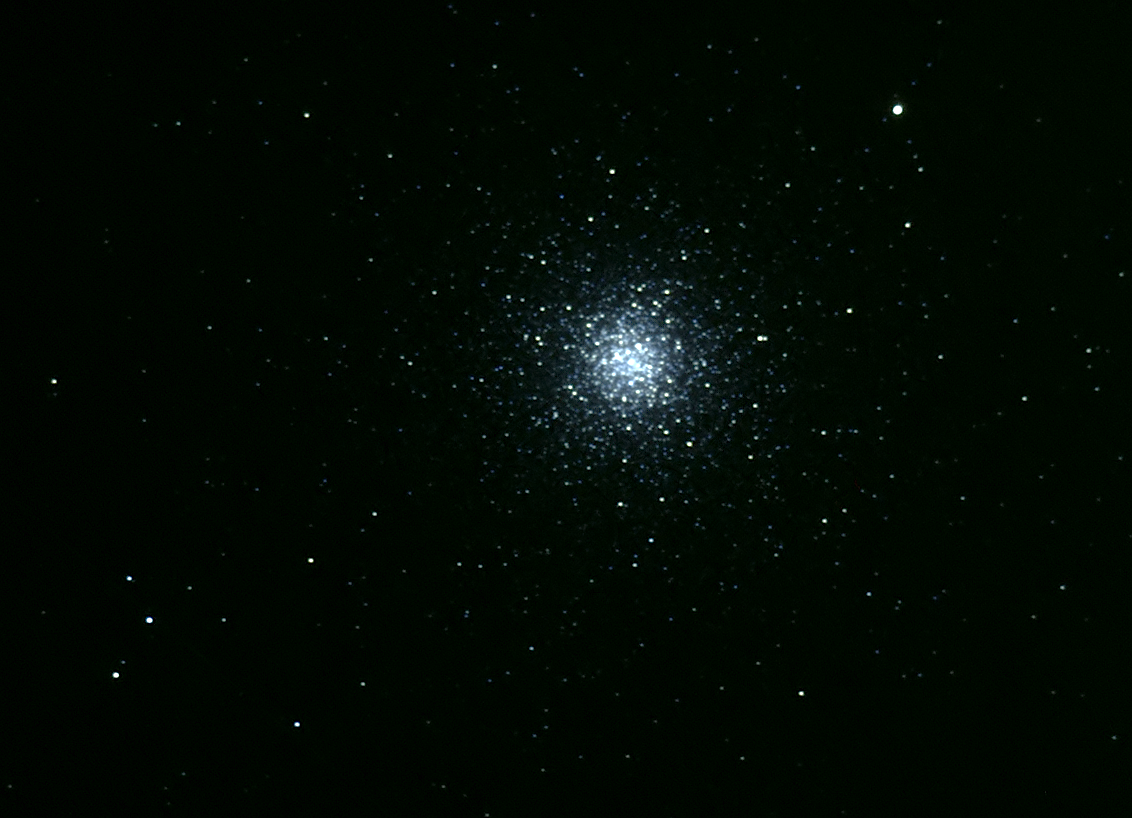 40 x 35s exposures of M104 were made with real-time dark-frame correction using AstroDMx Capture for Linux, saving the images as TIFF files using RAW 8 capture with high quality de-bayering on the fly.
The images were stacked in Deep Sky Stacker running in Wine and post processed in The Gimp 2.10 and Neat Image. 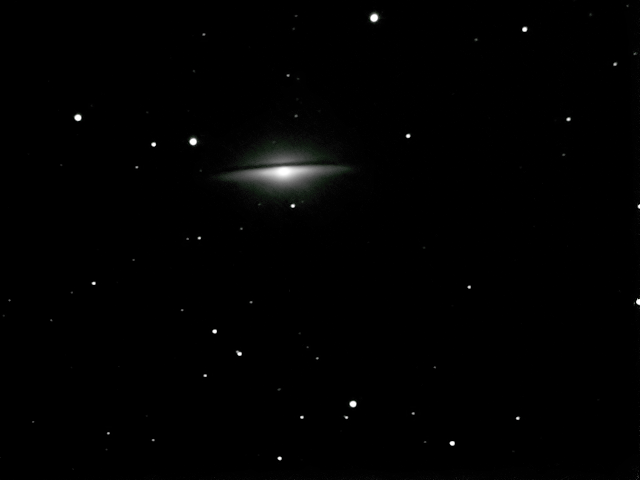 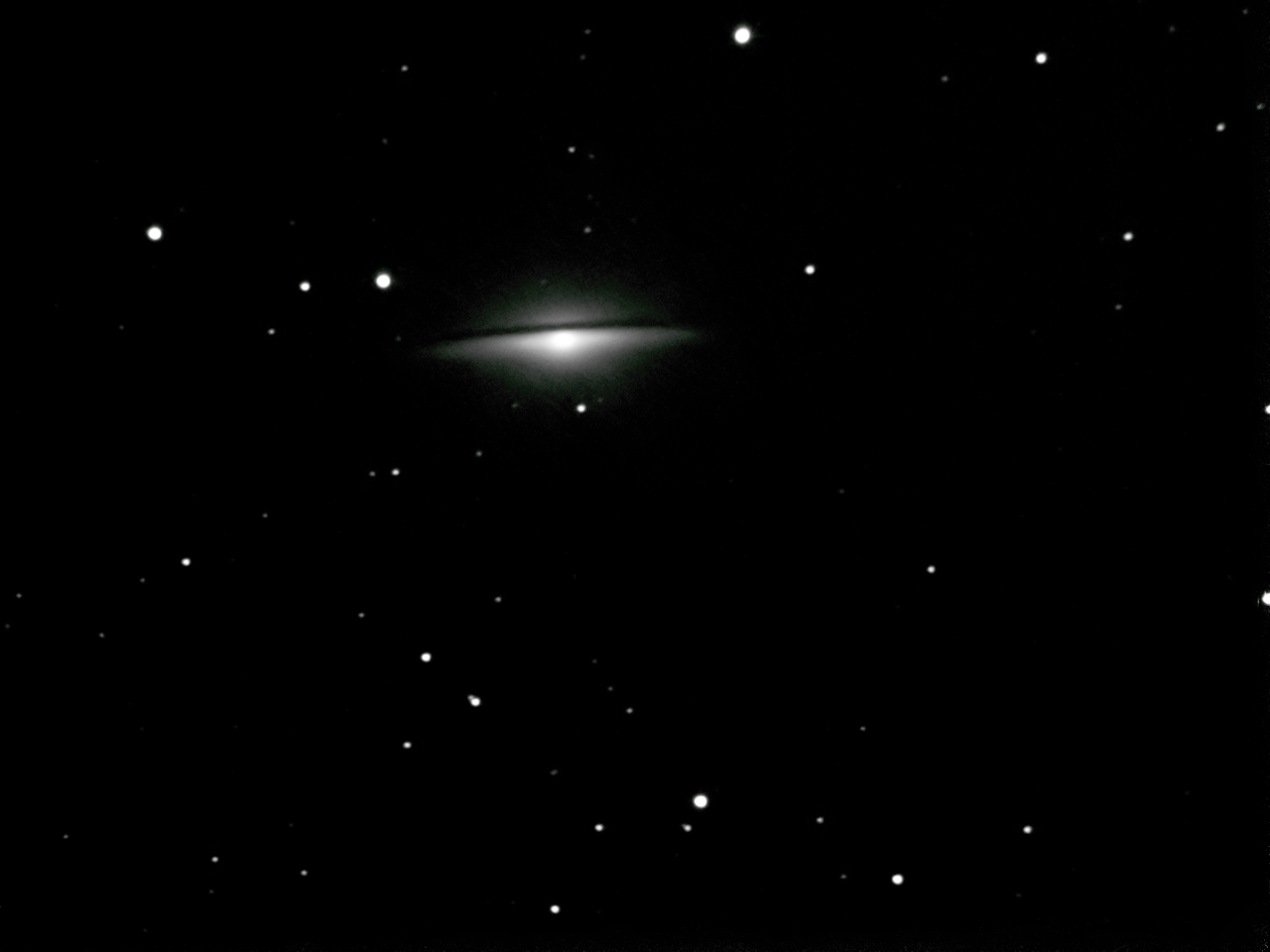 The camera was then tested in its high speed planetary camera mode. The lens from a x2 Barlow was screwed onto the nose-piece of the camera which was then placed at the Cassegrain focus of a Skymax 127 Maksutov. A region of interest of 320 x 240 was selected and a 2min SER file of Jupiter was collected (under poor seeing conditions) using RAW 8 capture with high quality de-bayering on the fly. 10,000 frames were captured. The best 40% of frames were stacked in Autostakkert! 3 and wavelet processed in Registax 5.1 both running in Wine. The final image was post processed in the Gimp 2.10

Jupiter with the GRS 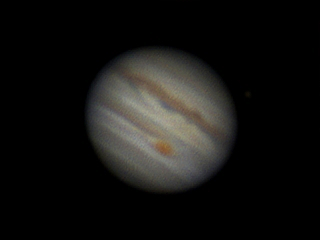 First impressions of the SVBONY T7 camera are that is is a very good value device, ideal  as an introductory camera for Solar System and brighter deep sky object astrophotography. It is an impressive device and has capabilities that will produce pleasing results. Depending on the exposure, with a region of interest of 230 x 240, a frame rate of up to 250fps can be achieved. It should also be noticed that relatively small aperture telescopes have been used for the current tests. Later testing will involve the use of much larger aperture telescopes.