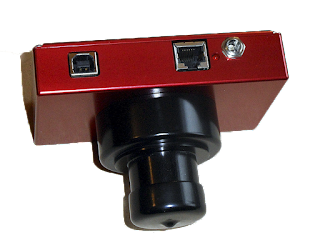 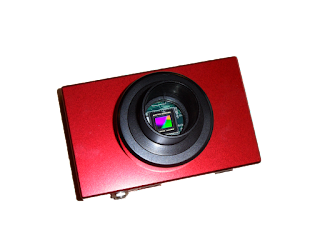 This camera is optimised for video astronomy. What this means in practice, is that when mounted on a telescope, the output from the camera can be displayed in near real time on the monitor of the computer that is running the Infinity capture software and to which the camera is attached. I tested the mono version of the camera, although a colour version is also available.
The camera is very sensitive and employs the SONY ICX825ALA CCD chip which has very low noise of just 6 electrons RMS and has a quantum efficiency of about 75% in the middle of the visible spectrum. It requires an external, 12 volts power supply and connects to the computer via USB 2.0.

The Atik Infinity has a 16 bit ADC, which is why this camera is fundamentally different from any other camera so far featured in this blog. An image with a 16 bit depth has a possible 65,536 levels of brightness whereas an 8 bit image only has 256 levels of brightness. The upshot of this difference is that it is much easier to saturate 8 bit images than it is to saturate 16 bit images. Consider a single pixel with a brightness value of 1 in an 8 bit image : If we were to sum 256 such images, then this pixel would be at maximum brightness; i.e. it would be saturated. However, if we had a pixel with a brightness value of 1 in a 16 bit image, we would be able to sum 65,536 such images before that pixel will saturate. This means that a 16 bit image will take longer to saturate as photons arrive at the sensor, and that there are a huge numbers of possible brightness states compared with an 8 bit image. The consequences of this are that when an image is stretched (i.e. the brightness values of the pixels are manipulated mathematically) it is possible to reveal subtle gradients in brightness in 16 bit images that would produce more crude steps in brightness gradients in an 8 bit image. With a linear stretch, each pixel is changed by the same factor, but with a non-linear stretch, mathematical functions can be used to increase, for example, faint parts of an image, whilst leaving the brighter parts untouched. 16 bit images are much better suited to this type of processing. The Infinity capture software has a selection of stretching functions, but sometimes parts of the live image appear to be saturated on the 8 bit display, whereas they are not saturated when the saved 16 bit image is stretched in a non-linear way.

The Infinity Capture software was used, but the image processing software provided by Atik was not used in these tests.
The Infinity software was launched, and set to Finder Mode. In this mode, the images are binned 4x4 and exposure is set to 1s. The object of interest is then moved into a suitable position on the screen. The image is noisy and low definition, but allows the object to be detected and positioned: 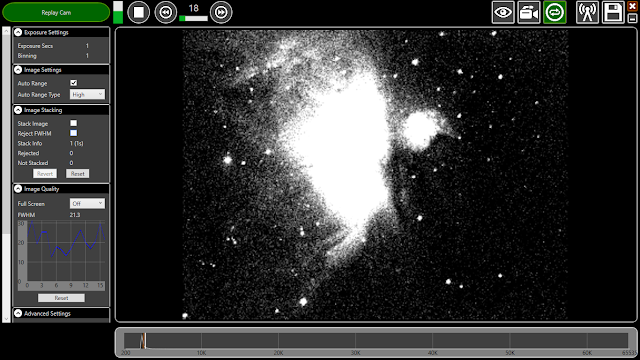 The software is then set to capture mode and an appropriate exposure (In the case of the Orion Nebula, 5s exposures were suitable with the equipment used) The image capture button was pressed and the images were allowed to stack on screen and then after a period of stacking (38 x 5s exposures in this case), the stacked image that has built up, now containing little noise is saved as a 16 bit file, usually a FITs file. This was a most convenient and pleasing way to capture images.

The Atik Infinity camera was placed at the Newtonian focus of an 150mm, f/5, Star Discovery, Newtonian. on an AZ GOTO mount to observe and capture images in these tests. 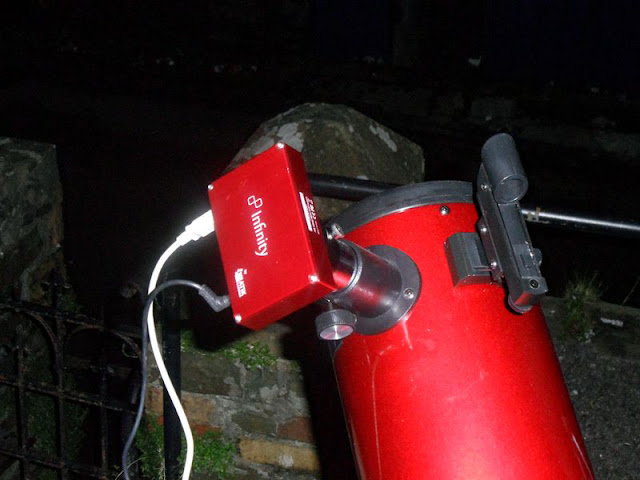 The Atik Infinity plus the Infinity capture software should be regarded as a Deep Sky astrovideography and image capture system.

Live stacking of the images allows the observer to see the image noise decrease as each image is added to the stack. Moreover, and most importantly, the Infinity capture software de-rotates the images as they are captured and added to the stack. This means that Alt-azimuth systems like the Star discovery system used here can be used for Deep Sky stacked image viewing and capture.

The captured exposures can be saved and at any time, used by the software in playback mode, which behaves exactly like the images coming in live from the camera. This means that functions such as flipping horizontally, and or vertically can be done later as the saved images are stacked. This can also be a useful feature for teaching purposes.


Images were collected of the Horsehead nebula and stacked on screen. The image was saved as a 16bit PNG file and post processed in Photoshop:
Horsehead Nebula 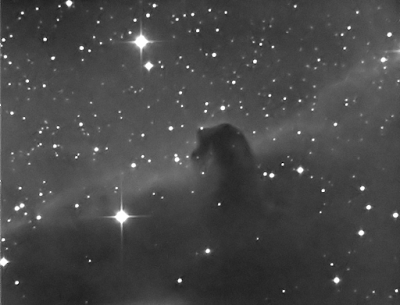 Live view of an image that was saved: 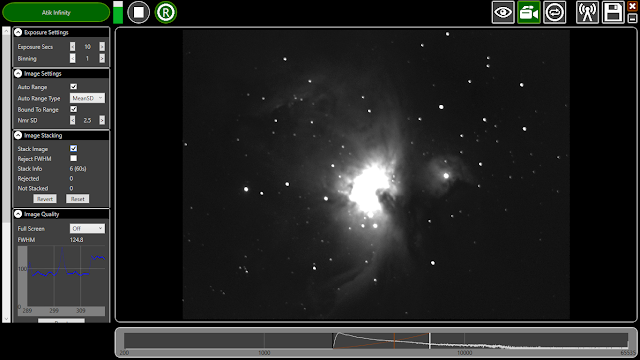 The histogram can be changed on the fly for the displayed image, to reveal different parts of the structure 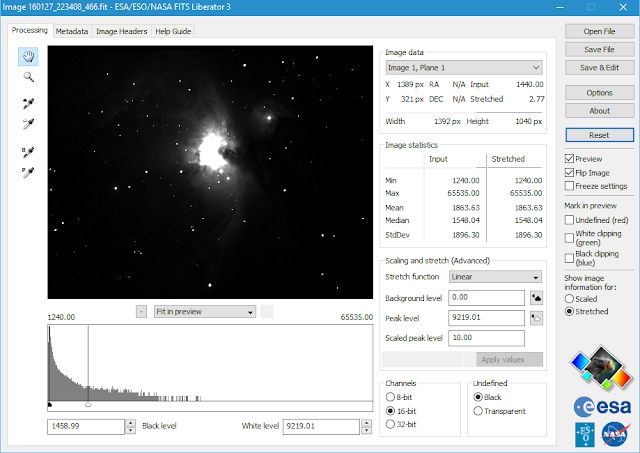 With a linear stretch, the central part of the image is over exposed. However, this is a camera producing 16 bit Fits files, so there is a lot hidden in the bright parts of the image:

A non-linear stretch of the image (ArcSinh(ArcSinh(x)) 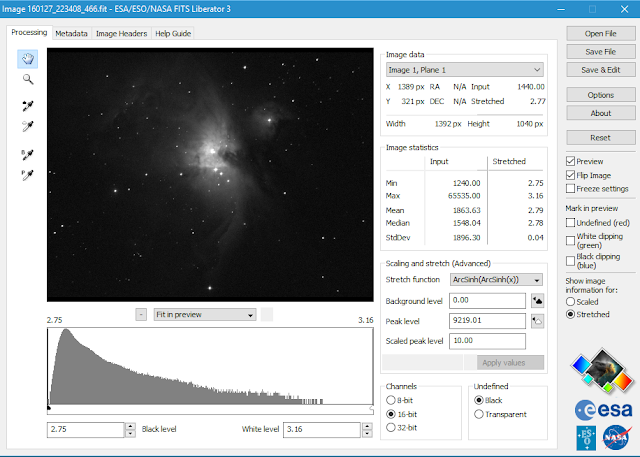 Now, none of the image is overexposed.
The image can then be saved out as a 16 bit Tiff file:
The 16 bit Tiff image 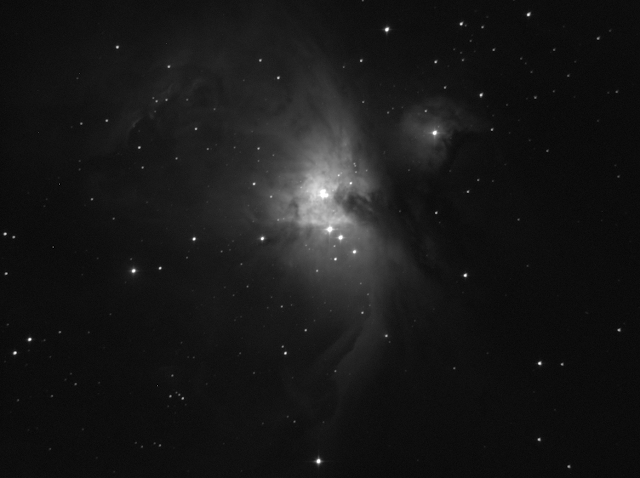 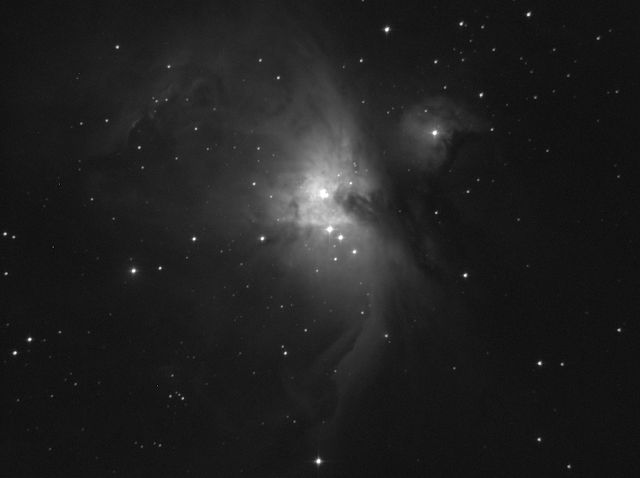 Finally, the image can be flipped and rotated if required, to give the required view, or the flipping could be done at capture time or in replay mode. 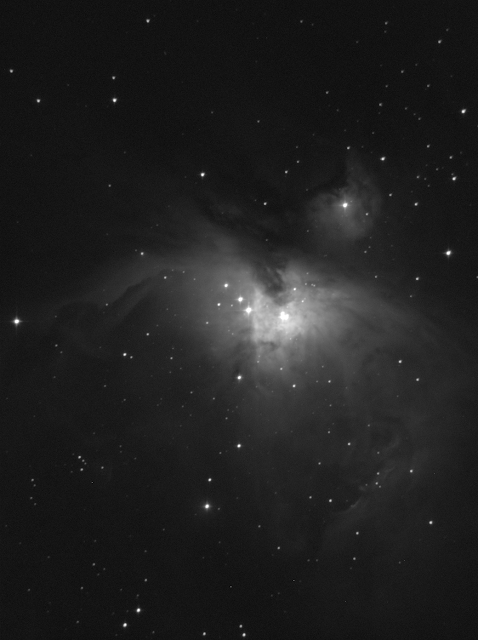 An Atik Infinity camera was placed at the Newtonian focus of an AZ, 150mm, f/5 Star Discovery , AZ, Newtonian. 15s exposures were set with image stacking. In both cases the stretching for viewing was set to MeanSD. This gave the best live views but is not applied to the saved images, which are saved as raw FITs files. 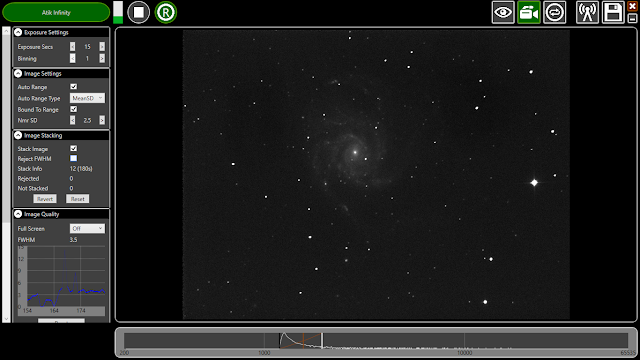 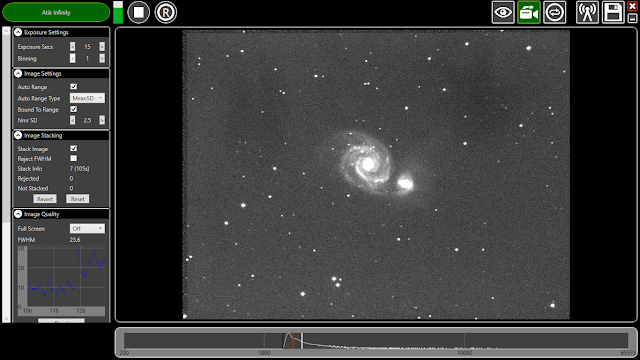 An Atik Infinity camera was placed at the Newtonian focus of a 150mm, f/5, Star Discovery AZ, GOTO Newtonian. Stacked images were captured as FITs files, processed in FITs Liberator and then Photoshop. Click on an image to get a larger view: 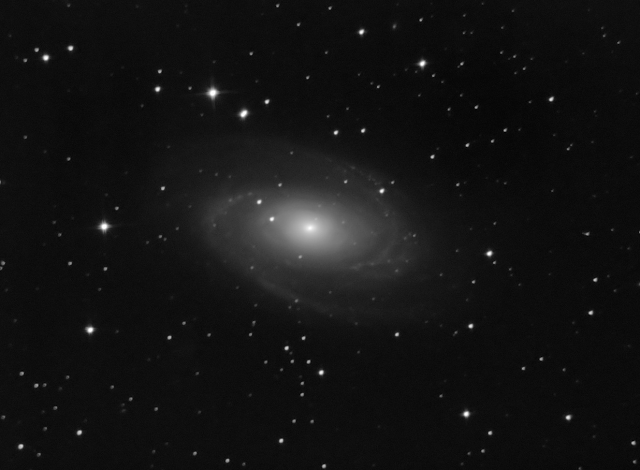 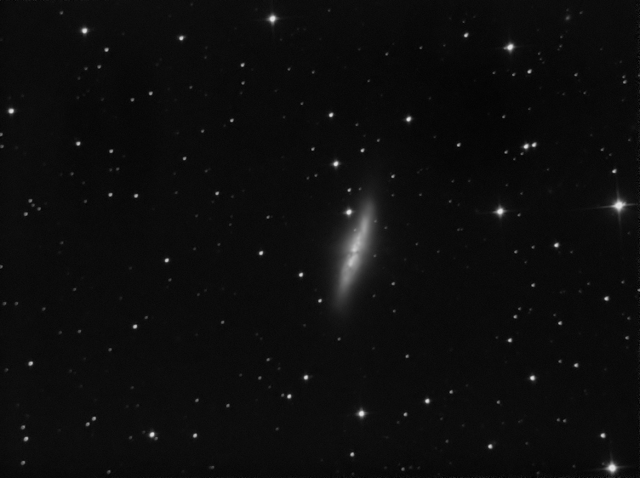 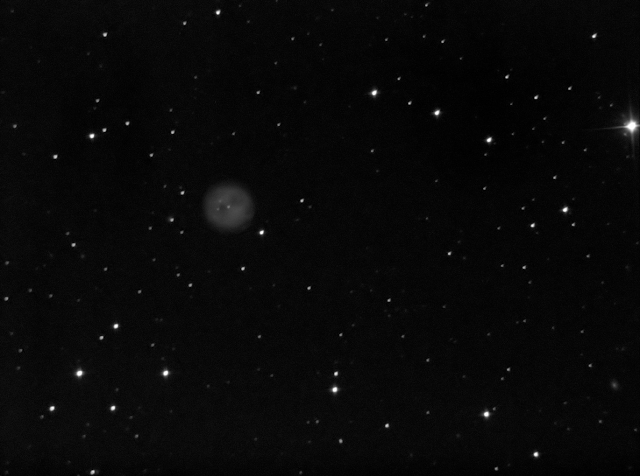 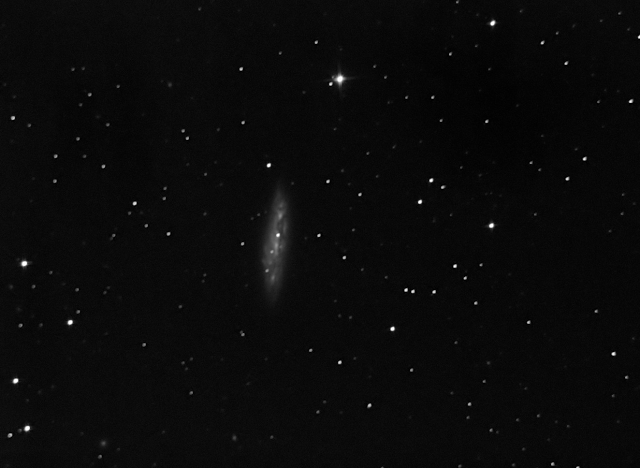 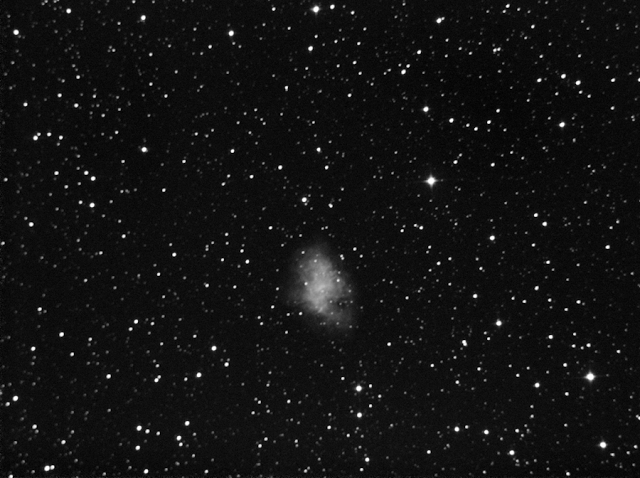 An Atik Infinity, 16 bit mono camera was placed at the prime focus of an 80mm, ED refractor. 6 x 30s exposures were stacked live and the resulting image was saved as a 16 bit FITs file. A non-linear stretch was applied in the ESO/ESA/NASA software FITs Liberator, and then further processing was done in Photoshop: 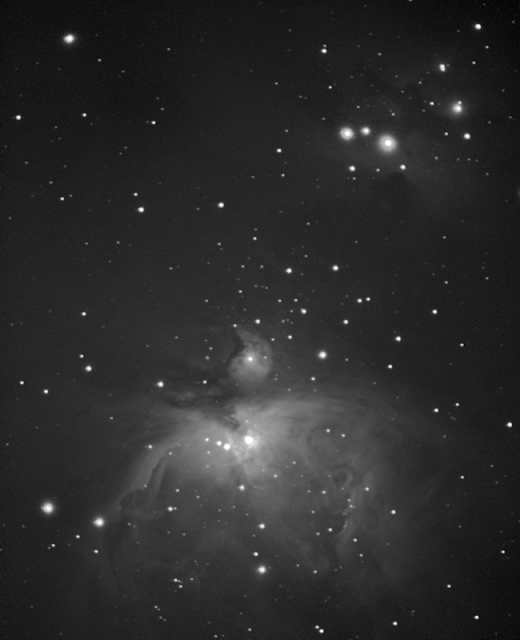 An Atik Infinity camera was placed at the Newtonian focus of a 150mm, f/5, Star Discovery, AZ Newtonian. 20x 15s exposures  of the Black-Eye Galaxy were stacked live and then saved as a FITs file. The image was non-linearly processed in the ESO, ESA, NASA Fits Liberator Software, and Photoshop: 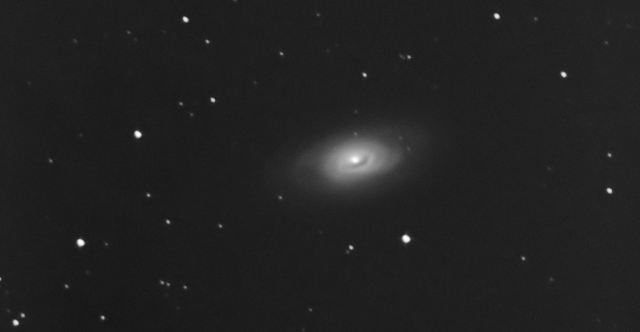 The Atik Infinity is an easy camera to use. Together, the Infinity camera and the Infinity software provide a powerful imaging system, that even with small scopes on AZ mounts, can produce good deep sky images. However, the high sensitivity of the camera, in conjunction with the live stacking of captured images, makes the Infinity a delightful tool for individual or shared observing and makes it an ideal camera for outreach activities.
There is also a colour version of the Atik Infinity, which was not tested here.

I have published a review of this camera in Popular Astronomy 3, pp 33-35 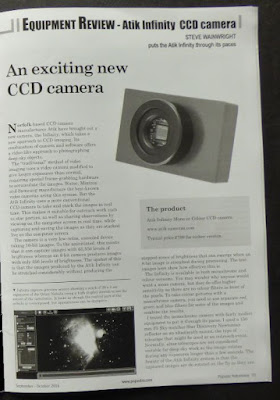 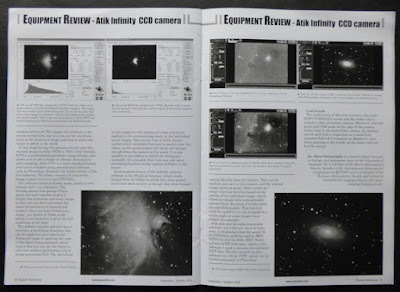