The equipment was set up as shown and the session was recorded to DVD in High Quality. 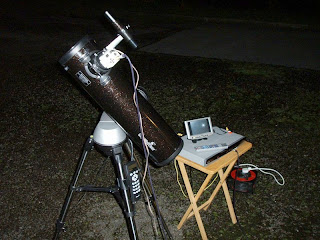 Real-time views were very good with very little amp-glow.
The camera was set to 256 frame integration. The image shows M27 in real time. 200 frames were captured from 20min of DVD recording using the GSTAR freeware capture software. A new frame was captured every 5.2 seconds. 25 frames were unchecked in Registax as they were trailed due to wind shaking the scope. The remaining frames were stacked in Registax. The results shows substantial image rotation in the final image. 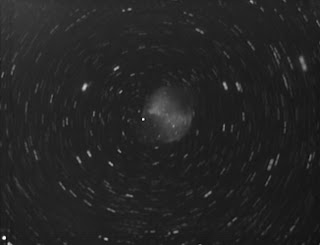 The individual BMP frames were extracted from the AVI using Virtual Dub and they were imported into Deep Sky Stacker. The same trailed frames were unchecked and the program was told to use the best 80% images for stacking. The resulting de-rotated image is shown below 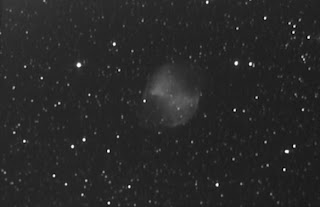 This small Newtonian AZ GOTO telescope and the Mintron proved to be a useful combination. 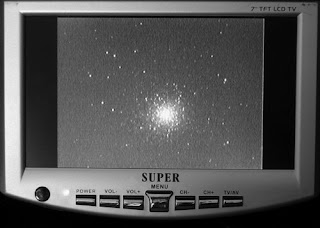 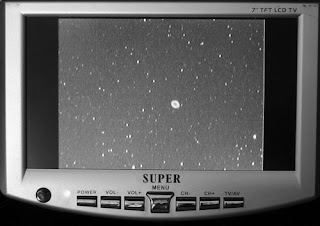 My new PDF eBook
My current news is that I have a PDF eBook on 'Observing and Imaging the Sun with Modest Equipment' The prominence image on the disk cover was captured with a Mintron. 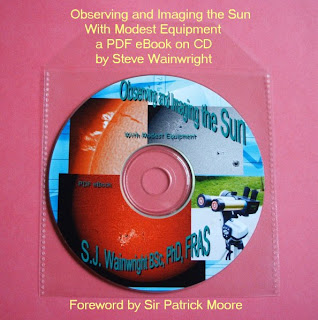 Click on the image for more information.
Dont forget to click on 'Older Posts' or 'Newer posts' below or browse the 'blog archive' on the left, or click on 2009 to see all of the posts for this year on one page.